We can’t always promise exactly who is going to play which instruments, but usually you can expect to hear cello, trombone, a bit of electronics, maybe some tuba, a touch of clarinet, plus e.g. recorder and other flutes, double bass, alpine horn, voice, bird calls, a few toys, and whatever else they come across that might produce some type of sound.

We also know that while it is true that Bristophe enjoy being on stage, their definition of just where that is appears to be a somewhat different one, as they tend to wander all around the room, playing behind or in the midst of the audience; or furthermore to disappear behind curtains or onto the hallways.

We do know for certain, though, that they improvise.

Bristophe is half Swiss living in Hamburg (Germany), half French living in places (Switzerland, Cyprus, UK...). Occasionally both halves meet in one place, and that’s when sound happens: sometimes extremely loud (even to them), sometimes so soft that you have to bend your head and dilate your eardrums to notice anything; sometimes far away, and sometimes as close as a few inches from you.

But whatever happens, it sparkles like a shimmering fire.

Bristophe and a guest pianist.

Bristophe and another guest pianist and also a guest violinist.

In 2008, Akouphène asked Bristophe and fifteen other bands to record a new music for a scene of Sergio Leone's The Good, the Bad and the Ugly. Watch Bristophe's version here:

The directors of an extremely great Frankenstein had asked Bristophe to record pieces for their movie. We made about twenty of them, and they were all dismissed. Hihihi! Seven of them are now in a free downloadable album.

Available for free on Test Tube.

Extract of an improvisation at the Alfred Schnittke Akademie, on the 14th of May 2009 in Hamburg.

We recorded Le fils de la prophétesse It is available for free on Pan y Rosas.

A live concert in Hamburg, Christiankirche, November 2009, which became the first part of our album die ersten Zwei Kirchen.

It also has the first duet for church organ and clavichord of the history of mankind. It is available for free on Pan y Rosas.

Master Dominique Falquet asked Bristophe to record some music for a demo movie for his martial arts club.

Bristophe gave a concert on Thierry Van Hasselt's "moving paintings" during the Electron Festival in Geneva in April 2011. The theme of the concert was "Electronic Unplugged", so we played totally acoustic instruments and made them sound like they were electronic. This is Thierry's Tableau 2.

During the summer we went to Spiez and we recorded a few new pieces in the local reformiert Kirche. It would become the second part of our album die ersten zwei Kirchen.

It also has the first duet for church organ and clavichord of the history of mankind. It is available for free on Pan y Rosas.

Concept and building of the box: Bastien Gachet and Mélissa Tun Tun

In December 2013 we were invited by the MEN (Ethnography Museum of Neuchatel, Switzerland) for a performance for the closing of their exhibition Hors-Champ ("off-camera"). Christophe built musical clothes that made us look like weird musical monks, and I composed a pagan mass for the glory of ethnography. Musical instruments were distributed to the audience and everybody had to participate, just like people would in an ordinary mass. It was probably the worst concert of our career because the audience members were all totally drunk since there were coming out of the open bar of the closing exhibition in question, and were playing at random and very loud. Since this experience, my pieces with audience participation bear the disclaimer "not suitable for drunk people". (It's true.)

After a short break, Bristophe resumed with more awesomeness/bristophoneness and a guest.

(videos and photos to come.) 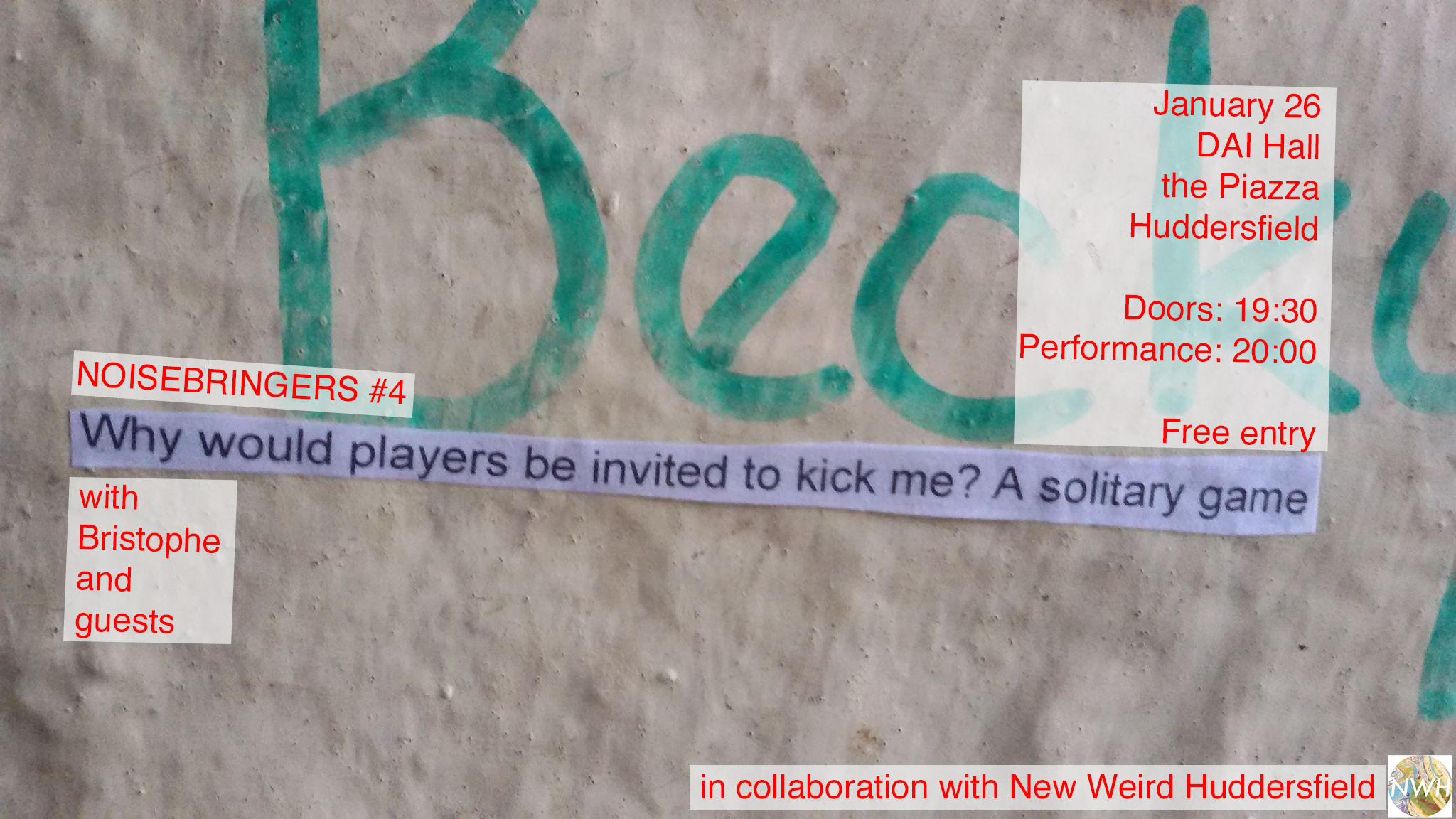 I know I just wrote it above, but here you are again, music for the masses is a (double) album recorded by Bristophe. Entirely improvised on countless instruments in two churches-chapels in Yorkshire, it features the following prestigious guest stars: Bethany Nicholson, Mark Slater, Moss Freed, Alessia Anastassopulos, David Birchall and Pierre Alexandre Tremblay. Available for free on Pan y Rosas.

die ersten zwei Kirchen is a (double) album recorded by Bristophe. It has the first duet for church organ and clavichord of the history of mankind. It is available for free on Pan y Rosas.

Le fils de la prophétesse is the very first (double) album recorded by Bristophe, but the second one to be released. (cf. dismissed Frankenstein below.) It is available for free on Pan y Rosas.

Dismissed Frankenstein is the second album (but the first one to be released) by Bristophe (Brice Catherin + Christophe Schweizer). Available for free on Test Tube.

Bristophe, participated in this very nice compilation made by akouphene whose name is gunsnnoises and which pieces can all be found for free on their Youtube channel.