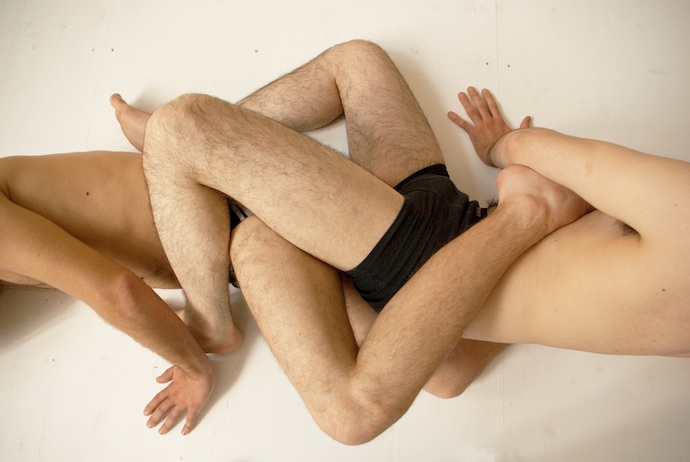 One day I woke up wondering how it would be like to write a piece for human bodies. If, instead of using instruments, one was using two musicians playing directly on each other's body, how would it sound like?

One cannot help noticing that two bodies that first discover each other, then mix with each other and finally quit each other, give birth to a heart-rending love story in eighty pages of score and a hour and a half of music.

Despite being strictly musical, Opus 40 centimètres has been premiered as a theatre show, with a scenography and a stage direction. To me, it was necessary that this complex music was readable to a maximum amount of listeners, who became, in the process, viewers.

A partial premiere (the first thirty minutes) was first given at the Lapin Vert in May 2007. The full premiere happened in March 2009 at the theatre du Grütli. For these two productions, the musicians were Brice Catherin and Cyril Regamey, and the set director and scenographer Delphine Rosay. In 2014 a new production took place at the théâtre de l'Usine (Geneva) with percussionists Alexandra Bellon and Didier Métrailler (in alternance), and violinist Fanny Martin-Loren. Delphine Rosay was in charge of the new set direction and Jonathan O'Hear was the light designer.