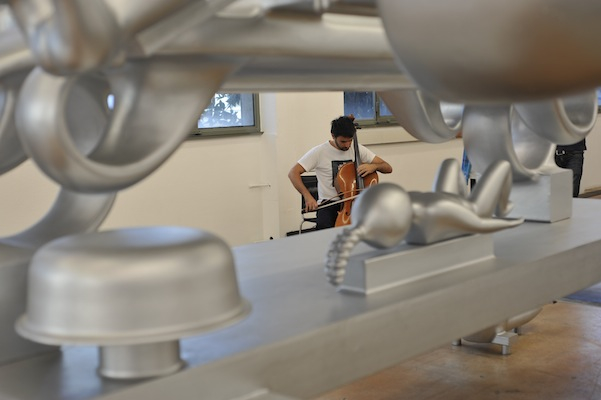 Since 2006 and with numerous artists from different styles (musicians, dancers, illustrators, film directors) we have consistently multiplied events and experiments with improvisation. Les jeudis du Spoutnik, les laboratoires d'improvisation, and also Connaissances du monde expérimental are the many concerts series which have allowed us, with numerous artistic obstructions, to explore sound, space, relationship to the audience, aesthetic, history, art and life.

These performances are the answer to an inextinguishable thirst for experimentation. They can be, beside this, a field of study for more important projects, or an effective, quick and radical solution to given propositions, or also the way for a few artists to meet "on the field". But the main engine is still the wish to create an artistic object here and now, fast and good.

On an invariably musical basis, we have built ties with dance, fine arts and the cinema. World famous stars such as Foofwa d'Imobilité (dance) or Windsor McCay (movie director) and some very young recruits like the members of hécatombe (illustrators) or outstanding students of the Conservatory of Geneva moved through the square of the Improvisation laboratories in all sorts of venues: concert halls, theatres, museums, cinemas, streets These forms fear no place or audience, as a number of these performances have been given for a "young audience".

You shall find below a pot-pourri of the following musical and performative experiments without illustrations nor animation movie: Experimental baroque improvisation, Okyou, The adventures of Super Baby Seal against the zombie fathers Christmas in Americ, Mediumnistic visits, Knowledge of the experimental world

Created by Jacques Demierre and Brice Catherin, Experimental baroque improvisation brings together musicians around a simple concept: to improvise on so called "ancient" instruments. Spinet and cello piccolo are therefore surrounded by the sackbut, the clavichord, the recorders, the baroque bassoon and the natural skin percussions. This gives a refined and surprising sound that you may listen to in the following examples:

After a first try in 2007 with two young dancers, one couldn't help but noticing that dancing and playing are the same thing: one has to build phrases, forms, an aesthetic, and both the musicians and the dancers are subjected to gravity. As soon as the second version of playing and dancing in improvisation , I had the great honour and pleasure to be joined with the best swiss dancer of the world, Mister Foofwa d'Imobilité.

We then proposed the show in various versions, including some for a young audience, and another one, on Foofwa's impulse, as a "dancerun" during the festival de la Bâtie 2010. Artists and audience had a lot of fun.


The trailer of The adventures of Super Baby Seal against the zombie fathers Christmas in America at the Villa Bernasconi (Lancy, Switzerland) on the 4th of December 2011, with Foofwa d'Imobilité, dance, and Brice Catherin, music.

The Mediumistic Visits of the MAMCO are a series of performances specific to this place and part of the big saga Knowledge of the experimental world.

I suggested the MAMCO to perform a few times a year (normally once per exhibition) by working, to start with, on three of the museum?s aspects: its permanent collection, its temporary exhibition and its architecture. The main idea, for each of these aspects, is to take a step aside,and bring them to life in a manner different to that of the look of the visitors and/or the guide. This is in order to see how, by integrating an element from the MAMCO to an artistic performance, which itself, is built from this element, the look that one shall give will change and grow rich. The artists' mission will be to give an intuitive voice (and not scientific, historical, analytical or critic) to these pieces or art, as would mediums give to spirits.

The very first mediumistic visit of the history of mankind took place during the summer 2011 at the Musée Historique de la Ville de Lausanne and was guided by Edmond et Catherine. The idea is to offer my mediumistic skills to any museum and gallery that wishes so. Yippee.


Selected bites from the first mediumnic visit of the MAMCO, on the 26th of February 2012.


Selected bites from the mediumnic visit at the Deichtorhallen, Hamburg, on the 30th of May 2012, for Anthony Gormley's installation.

Selected bites from the second mediumnic visit of the MAMCO, on the 16th of September 2012.

Selected bites from the third mediumnic visit of the MAMCO, on the 18th of November 2012.

Knowledge of the experimental world

First known under the name improvisation laboratories, it was then renamed knowledge of the experimental world, and this concept has given me the pleasure to have invited the most eminent improvisers of Switzerland and the rest of the world to join me in order to experiment constrained improvisation in all its possible forms: improvisation of stereotypes, of buildings, of unknown instruments, of orchestra, of joystick-controlled electronic, etc. As in many other we pushed further back the limits of music, for a mature audience, a large audience and/or a young audience.