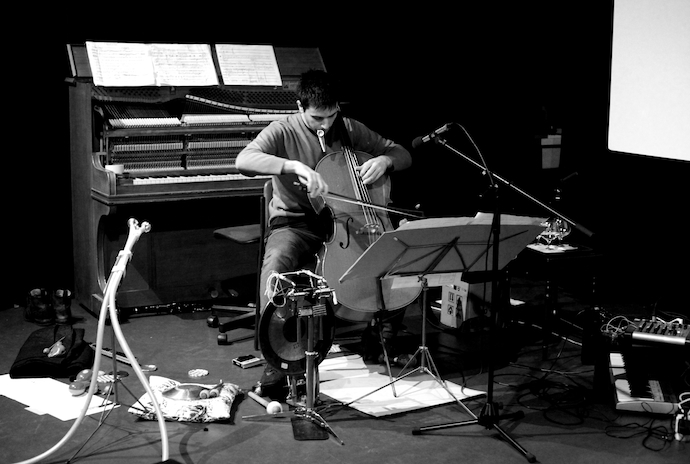 In 2010, flabbergasted by the two barcelonian artists David Bestué and Marc Vives' movies, Brice Catherin decides to rob a part of their work to give them live performative music. After a few discussion with the two directors, and over two years, two musics are being premiered: Acciones en Casa and La Confirmacion.

In January 2011, at the cinema Spoutnik and with the occasion of the festival particles organised by the théâtre de l'Usine (Geneva), Brice Catherin premiered Acciones en Casa, a piece for cello, percussion, piano, clarinet, recorder, guitar, glasses, kazoo, hosepipes, voice and electronic played by a single musician - in this case the composer - on the homonymous movie.

The main idea was to respect the spirit of the movie as given by the two spanish directors David Bestué and Marc Vives. The instrumental installation and the performance had therefore to be, under a chaotic appearance, poetic and functional, dadaist and resolutely contemporary, out of line but nevertheless practical.

The premiere happened in the presence of the directors, and the performance secured their entire approval.


The full movie with the recording of the premiere.

In 2012 at the Zinéma in Lausanne is premiered la confirmation, for moving clavichordist with live electronics. Like in the movie, the musician (who was the outstanding Viva Sanchez-Morand for the premiere), like the hero of the film, literally (the clavichord has small wheels) goes through sonic spaces, bewitching but dark, sometime familiar, sometime unknown, but always impenetrable, until the "singer" arrives. At this point, the musician becomes this singer character, and goes back and in reverse through all these sonic landscapes and light them up with her verbal and musical explanations.


The full movie with a live recording made in the théâtre de la Traverse (Geneva) in July 2012.