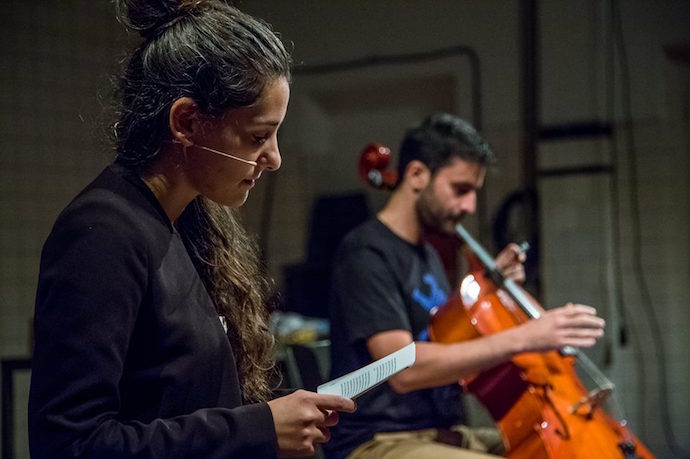 In 2016 Sophie Fetokaki and Brice Catherin met, and shortly after they did things.

το γιασεμί is a traditional Cypriot song. It has been arranged and improvised by Sophie Fetokaki (voice) et Brice Catherin (cello).

Svioloncello is a work for voice, cello and luthier by Sophie Fetokaki, Brice Catherin and Robin Jousson.

Svioloncello is an exploration of the materiality of sound. Over the course of 60 minutes we disassemble a cello while it is being played, exposing both the physical instrument and the source and structure of its sound. This brutal and at times violent process is accompanied by a performed text – a reflection on the circumstances and an investigation into the mythical aura of the cello.

Svioloncello takes as a point of departure the radical practices of Dada and Fluxus art, straying also into the territories of performance art, sound poetry, improvisation and new music. We practice a calculated irreverence to all pre-determined disciplines, taking from them what is of interest to us, and abandoning the rest.

The cello, like the rest of the family of strings, is always surrounded by an ‘aura’, derived from the concept of the ‘genius’ of composers, the ‘sacredness’ of classical music, the centuries of music composed for the strings family, and on. In Svioloncello we disassemble this aura, one piece at a time.

What is left after this act of violence? Are we able to separate the instrument from its aura? To perceive this sacred object as nothing more than pieces of wood and metal? What do we gain by doing this?

O, or what you will

O, or what you will for cello, electronics and paper, is a deconstruction of O Mistress Mine, the song sung by Feste (the jester) in Act II, Scene III of Shakespeare's Twelfth Night, Or What You Will. In this scene Sir Toby Belch and Sir Andrew Aguecheek are at Olivia's house, drinking and wise-cracking. The jester enters and Sir Toby asks him for a song. He sings O Mistress Mine.