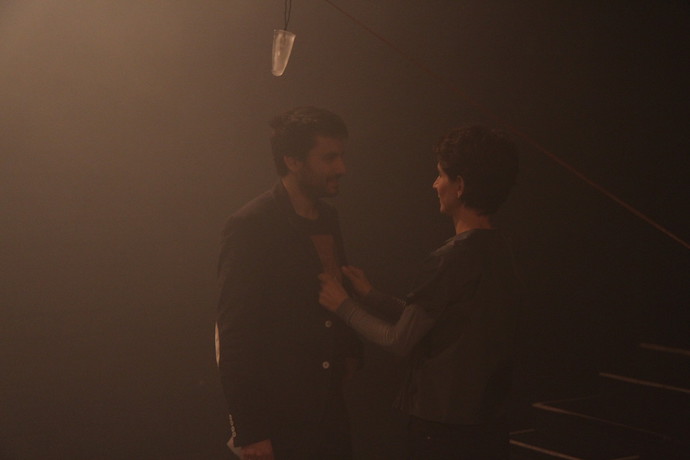 Since 2012 writer Karelle Ménine and myself are reflecting on the possible relationships between music and text. From theatre performances to sound installations, we explore different "states of listening" and put together electroacoustic music, poetry and politics that travel between the speakers and the voices of the actresses.

Premièred at Théâtre de l'Usine in Geneva (Switzerland) from the 24th of October to the 3rd of November 2013.

Motionless Opera is a counterpoint between text, image and music. These arts are summoned for a ménage à trois without any hierarchy. These three practices could each exist on their own (one text, pictures, one music) but, together, they blossom and combine into one Gesamtkunstwerk.

From the opera we keep the tools, but reject some habits: pathos, grandiloquence and drama are excluded. Acting and narrating are reduced to their simplest, purest form. Thus a text, read and recorded, coming from speakers placed all around the audience. Thus, electroacoustic music, tailor-made for the speakers, whose first quality is to plunge the audience into a state of listening. Thus, pictures, made of three humans (the three authors) on stage, a few props, and light, to compose motionless tableaux vivants. These pictures will not be comments nor illustrations, but another proposition coming as a counterpoint to the text and the music.

Very gently, Motionless Opera will stir in the dirtiest things we have inside us.